New Plymouth animal control officers have been on the receiving end of three death threats in the past six months.

It's part of an escalating problem of physical and verbal abuse being hurled at council staff, customer and regulatory service manager Mary-Anne Priest said.

Charges have been laid in two cases and in the third a warning was issued. Two people have also been trespassed from the building because of abuse, she said.

"We're been seeing an increase in abusive customers in the past six to 12 months," Priest said.

The same abuse is happening around the country and has lead to some councils, including the South Taranaki District Council, issue wardens with body-mounted cameras to combat the behaviour.

Priest said the New Plymouth District Council has been trialling one camera with the animal control team for the past six weeks.

Priest said animal control was probably the most volatile day-to-day job at the council but those using the camera felt safer and reported experiencing less abuse.

"There's no doubt people are far more congenial when they're being filmed." 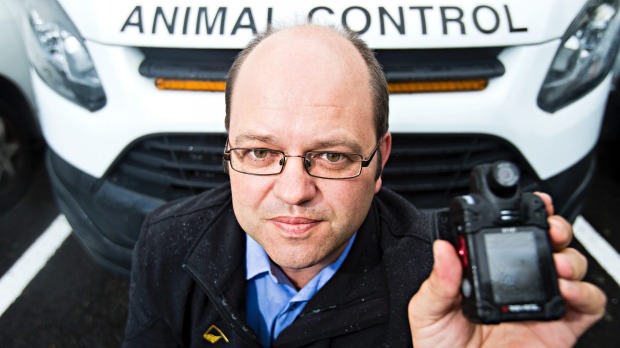 Animal control acting team leader Karl Osten said the RS2-X2 camera is also useful for training and collecting evidence which could be used in court.

Interactions could be gone over with officers and advice given about how to do things better next time, he said.

Priest said parking wardens would trial the camera next.

Officers can be very isolated at times and as soon as people see the camera their behaviour changes, he said.

"Our staff have seen a massive decrease in aggressive and abusive behaviour. They can't speak highly enough of them."